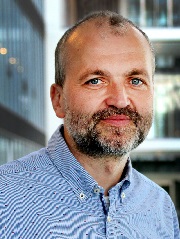 Olaf Jandura was born and raised in Dresden, Germany. He studied communication studies, politics, history and sociology at the University of Technology Dresden and at the Universidad de Navarra in Pamplona, Spain. He
graduated in 1999. Until 2006, he worked as Assistant Professor at the Department of Communication Studies at the University of Technology Dresden where he completed his PhD thesis on the subject of "Small parties in a media democracy. Constants and specifics of the media coverage on ruling and oppositional parties".

From 2006 to 2012, he worked as assistant professor at the Department of Communication and Media Science at the
Ludwig-Maximilians-Universität Munich. During this time, he was Deputy Chairman and later Chairman of the Empirical Research Methods Division of the German Association of Journalism and Communication Studies (DGPuK).